The Dalton Sanatorium of Prince Edward Island 1913-1923
Publication of the Year in 2009
by Leonard Cusack
Non-Fiction, 168 Pages printed b/w, softcover 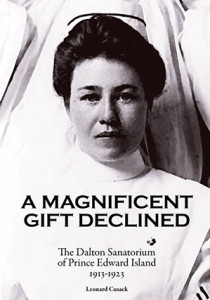 No plague or war or disease has ever equalled the heartbreak that tuberculosis caused on Prince Edward Island. Known as “consumption” in pioneer days and as TB in modern times, it brought a miserable death to Island farmhouses, fishermen’s cottages and village homes up until the 1950s. After the pitiful medical resources of the local doctor were applied and failed, many Island families endured hopeless vigils at the bedsides of loved ones, armed only with superstition and folk medicine. In desperation, they tied salt herring to the feet of the sick to help draw out their fever.
No one was safe. Charles Dalton was a millionaire from western PEI who had made a fortune in the silver fox industry, but his money couldn’t save his two beloved daughters from dying of tuberculosis. In response, he used his own money to build a provincial sanatorium in Emyvale, near Charlottetown, to help treat the disease. The agreement was he would build this state-of-the-art sanatorium, and the PEI government would operate it. Construction began in 1913, but by 1923 — with tuberculosis still rampant — the Dalton Sanatorium was history, its doors closed and all staff gone.
Author Leonard Cusack documents the political and social issues that caused its rise, and demise. Besides those just wanting to read a good story, anyone concerned with public policy or communicable disease can gain valuable insights from this socio-political history set in a small-scale society.

“This manuscript offers a compelling story for Islanders whose lives are in some way connected to the Dalton Sanatorium or to the scourge of Tuberculosis on PEI at the beginning of the last century.”
Dr. James Moran, Department of History, University of PEI

“This well researched and well documented monograph on the Emyvale hospital is an exhaustive and thoroughly comprehensive story of the history of Prince Edward Island’s first sanatorium . . . A wonderful read.”
Dr. Francis W.P. Bolger, CM, OPEI

“Leonard Cusack has done good service for Prince Edward Island political and social history. His clear-sighted examination of the political maneuvering and posturing of those days reveals clearly what the sad effects of poverty and political partisanship, mixed with a dose of hypocrisy, can do to a worthy cause.”
John Cousins, folklorist and historian, Prince Edward Island