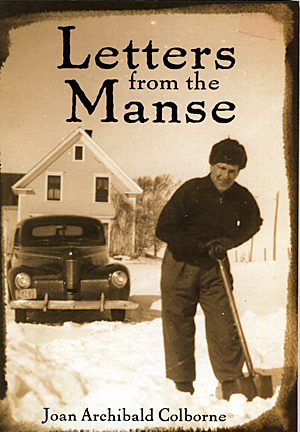 “Well-written, superbly detailed, and delightfully witty . . .
I read this collection of letters in one gulp . . . I gave this manuscript to my 86-year-old mother who also read it in one sitting.”
Dr. Margaret Conrad, Honorary Research Professor at the University of New Brunswick

FROM THE INTRODUCTION
by folklorist John Cousins:

“There was a time, no further away than half a century, when Canadians were mainly a country people, scattered in a network of village and farming communities, to the edges of Canada . . . And, in thousands of these places, seeking to give spiritual unity to the ordinary people, laboured the Protestant clergyman and his wife.

They were a special breed, these churchmen and women. We knew them from a distance, for they were in our place, but somehow not of it. . . They did not attend dances nor did they discuss hockey. They had apparently no knowledge of the fight at the party down the road. . . They did not Gossip, and They Did Not Take the Name of The Lord Their God in Vain. Some of them (the men) smoked, but most did not, and, surely, They Did Not Drink. Most important of all, They Did Not Talk Politics . . .

We knew also that Protestant clergy usually came in pairs, and that, too, was good . . . thus, The United Church Couple.

Of course, we know now that our views of them were wrong, and that our picture was painted only in stark black and white. . .we look in vain for a good description of what they thought of us, of themselves, of the immensely important work they did, and of the countryside in which they laboured. . . Hence the importance of Joan Colborne’s wonderful Letters from the Manse. For she paints in the vivid colours we knew were there, and illuminates the fascinating personal experience of two young, idealistic, and dynamic church people in the rural Canada of half a century ago. . .”