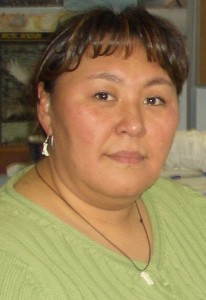 Leesie Akulukjuk spent her early childhood living in a settlement, but her later
childhood was spent living with her family in the traditional way on the land. This “meant helping one another and caring for each other because in those days one could not live alone without regard for other people.” Leesie and her family moved back into modern society in Pangnirtung after living on the land for a number of years.

As an adult Leesie became interested in Inuit folk medicine that “does not have
buildings, books or rules… it is shared knowledge.” To learn more, she interviewed Elders and discovered that Inuit medicines were based on three elements: plants such as Mountain Sorrel, animals such as caribou antlers, and direct treatments for illnesses such as snow blindness. As a result of her inquiry, Leesie intends to prepare teaching documents so that this important aspect of Inuit culture will survive.