Abstract: Spatiotemporal changes in China’s carbon emissions during the 11th and 12th Five‐Year Plan periods are quantified for the first time through a reconstructed nationwide high‐resolution gridded data set. The hot spots of carbon emissions in China have expanded by 28.5% (toward the west) in the north and shrunk by 18.7% in the south; meanwhile, the emission densities in North and South China have increased by 15.7% and 49.9%, respectively. This suggests a clear transition to a more intensive economic growth model in South China as a result of the energy conservation and emission reduction policies, while the expanded carbon hot spots in North China are mainly dominated by the Grand Western Development Program. The results also show that China’s carbon emissions exhibit a typical spatially intensive, high‐emission pattern, which has undergone a slight relaxation (up to 3%) from 2007 to 2012 due to a typical urbanization process.

Summary: Implementation of China’s recent climate pledge to the Paris Agreement requires effective carbon reduction policies at various geographical and administrative levels, which will rely on not only accurate estimates of national total emissions but also on a comprehensive understanding of the spatiotemporal changes in carbon emission patterns. The latter is crucial for allocating carbon emission quotas and developing appropriate policies at regional and local scales, yet it remains poorly understood. To this end, we reconstruct the nationwide high‐resolution gridded carbon emissions for the first time by compiling the CO2 emissions from industrial, residential, transportation, and agricultural sectors. This allows us to investigate the spatiotemporal changes in China’s carbon emission patterns during the 11th and 12th Five‐Year Plan periods when unprecedentedly rapid economic growth, technological development, and environmental change have taken place. Moreover, this enables us to quantify the influences and effectiveness of previous carbon reduction policies (up to 3% relaxation to China’s spatially intensive high‐emission pattern and 16% reduction in emission intensity). Our findings are of great significance not only for developing evidence‐informed climate policies in the current and forthcoming five‐year planning periods in China but also for providing scientific references to other countries in support of developing effective climate policies.

The following paper about China’s low-temperature extremes has recently been accepted for publication by Climate Dynamics: 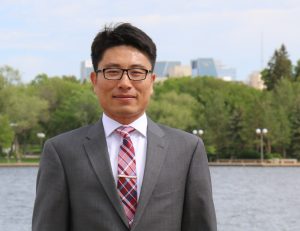