Dr. Edward Chung (Asian Studies and Religious Studies) has had two eventful years with several publications and presentations. In December 2019, he guest-edited and published Acta Koreana 22 (2), a peer-reviewed international journal issue with its special theme on “Good and Evil in Korean Philosophy, Religion, and Spirituality.” This special issue includes four scholarly articles by 4 eminent and established scholars (including Robert Buswell of UCLA and Don Baker of UBC) in addition to his own article, “Yi T’oegye on Transcending the Problem of Evil: A Neo-Confucian and Inter-religious Perspective.” Since October 2020, Dr. Chung published two major monographs titled, The Great Synthesis of Wang Yangming Neo-Confucianism in Korea: The Chonŏn (Testament) by Chŏng Chedu (Hagok) (Rowman & Littlefield Publishing, 390 pages) and The Moral and Religious Thought of Yi Hwang (Toegye): A Study of Neo-Confucian Ethics and Spirituality (Palgrave Macmillan, 230 pages), along with a chapter “Neo-Confucian Philosophy in Korea” in The Encyclopedia of Philosophy of Religion (Wiley-Blackwell, 2021). He also presented five scholarly papers on Neo-Confucianism and comparative philosophy/religion at the 2020 and 2021 Annual Meetings of American Philosophical Association (Philadelphia and virtual), 2021 Annual Meeting of American Academy of Religion (St. Antonio, Texas or virtual), and then 2021 Annual Conference of International Society of Korean Philosophy (virtual). Furthermore, we look forward to Dr. Chung’s forthcoming (March/April 2022) edited book, Emotions in Asian Philosophy and Religion: Korean Confucian, Comparative, and Contemporary Perspectives, Palgrave Studies in Comparative East-West Philosophy series, no. 5 (Palgrave Macmillan; about 400 pages).

Dr. Carlo Lavoie’s (Modern Languages and Acadian Studies) book Liberté, imaginaire et espace de contrainte: Questions de contexte en littérature (Freedom, Imaginary and Space of Constraint: Questions of Context in Literature) is now available. Published by Les Éditions du Cygne in Paris, this collection comprises eleven essays from leading scholars who propose a reflection on the notion of freedom through the experience of writing. Dr. Lavoie signs the introduction and a chapter on the freedom of the Acadian language in Acadian Georgette Leblanc’s poetry. Dr. Sanda Badescu (Modern Languages) also signs a chapter on the freedom of anachronism in the opera Der Rosenkavalier.

Dr. Laurie Brinklow (Island Studies) released a poetry book earlier in 2021 titled My island’s the house I sleep in at night. Paul Gallant of Atlantic Books chose Brinklow’s book as his favorite read from their “#GiftAtlantic Collection”, in which he praises her poetry collection by saying, “Brinklow finds what’s unique in every exchange, whether it’s in Newfoundland or Tasmania, and in every moment. And then, through her rich imagination, she makes it her own. And ours.” This book was also recently published in Tasmania by Walleah Press.

The International Medieval Conference at Leeds, UK, held a session in July in honour of our late colleague Dr. Catherine Innes-Parker (English). The session focused on one of the research areas Catherine was internationally known for, the Wooing Group and its Descendants. The session, held virtually, was followed by a social hour for her colleagues and friends from around the world.

“We were so happy to have members of her family there, including her mother and two of her children. It was a wonderful indication of how much she was valued both for her scholarship and for her support for junior scholars.”

A Festschrift in her honour is also in preparation.

UPEI is happy to announce the arrival of Dr. Margot Maddison-MacFadyen to the Faculty of Arts back in May. She is a postdoctoral fellow in the GeoREACH Lab.

Congratulations to the following on making the Dean’s List for the 2020-2021 school year! Keep up the great work!

END_OF_DOCUMENT_TOKEN_TO_BE_REPLACED

The Connexions Seminar Series at UPEI aims to foster a deeper understanding of the many roles that the liberal arts play in making sense of our increasingly complex world, and how we can learn from the distinct ways of knowing within our various disciplines. With the fall semester underway, The ConneXions Seminar Series is now soliciting submissions from members of the Faculty of Arts for presentations and collaborative projects. We are also planning to host panel discussions and symposia that will tackle current, complex questions from a variety of disciplinary perspectives. What big questions or contemporary issues would you like us to explore together in Arts in a multidisciplinary way? Let us know!

Please send your presentation proposals and your ideas for panel discussions/symposia to Andrew Zinck (azinck@upei.ca).

Another faculty member in the spotlight is Dr. Benet Davetian (Sociology and Anthropology), who has recently been published in the Encyclopedia of the Renaissance. You can also look for his new book, The Testament, on Amazon.com starting October 15th. Dr. Davetian is working on another new book currently, In the Stillness of My Mind.

Last Monday, Dr. Jeffrey Collins (Political Science) was an election night panelist for SaltWire media where he took part in a conversation about the Green Party of Canada and the “collapse of the Green support” in PEI. In addition, Dr. Collins’ has recently grabbed more people’s attention regarding his paper on the future of Canada’s submarine fleet which points to the “changing geopolitical currents and the proliferation of new weapons among the reasons why a blue water navy needs to incorporate submarines as part of its fleet structure,”. This paper is titled Deadline 2036 – Assessing the requirements and options for Canada’s future submarine force.

Thank you to all presenters and attendees for the Winter 2021 series and we look forward to the Fall. 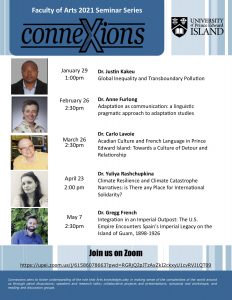