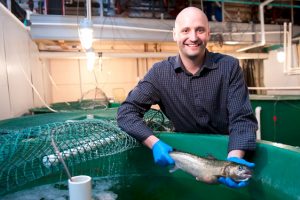 Dr. Alaa Abd-El-Aziz, UPEI’s president and vice-chancellor, joined with leaders across the Atlantic region today to welcome news of the Ocean Supercluster, announced this week by the federal minister of Innovation, Science and Technology, Hon. Navdeep Bains.

“There isn’t an aspect of the Ocean Supercluster proposal that UPEI cannot strengthen with our research expertise in fish health, climate adaptation, and sustainable design engineering,” said Dr. Abd-El-Aziz. “The student experience at UPEI has been enhanced in recent years through our close relationships with industry. We are ready to build on these relationships and make significant and lasting contributions to this important economic initiative for our region.”

The Ocean Supercluster will harness emerging technologies to strengthen Canada’s ocean industries—industries like marine renewable energy, fisheries, aquaculture, oil and gas, defence, shipbuilding, and transportation. This supercluster will ensure Canada’s future prosperity as a source of jobs and solutions to global challenges, such as how to meet the energy demands of the 21st century.

Over the next ten years, the Ocean Supercluster is expected to create more than 3,000 jobs across the Atlantic region and have an economic impact of more than $14 billion.

Globally recognized for its research and service work in aquatic animal health and epidemiology, UPEI’s Atlantic Veterinary College plays a leading role in aquatic food animal health in Canada and beyond. Housed at AVC is an interconnected network of aquatic research centres and programs, involving internationally renowned researchers who collaborate with industry, government, and academic partners around the world to protect the health and productivity of wild and farmed fisheries. Facilities include state-of-the-art aquatic research laboratories, a 12,000-square-foot aquatic animal facility, and an ISO-17025 accredited diagnostic service.

The University of Prince Edward Island prides itself on people, excellence, and impact and is committed to assisting students reach their full potential in both the classroom and community. With roots stemming from two founding institutions—Prince of Wales College and Saint Dunstan’s University—UPEI has a reputation for academic excellence, research innovation, and creating positive impacts locally, nationally, and internationally. UPEI is the only degree granting institution in the province and is proud to be a key contributor to the growth and prosperity of Prince Edward Island. 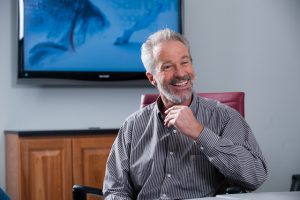 Dr. Ian Gardner, a professor of epidemiology and Canada Excellence Research Chair (CERC) in Aquatic Epidemiology at UPEI’s Atlantic Veterinary College, is being honoured with the prestigious Calvin W. Schwabe Award for lifetime achievement in veterinary epidemiology and preventive medicine.

The Association for Veterinary Epidemiology and Preventive Medicine (AVEPM) will present Gardner with the award at the 2017 Schwabe Symposium on December 3rd in Chicago, Illinois. Gardner was nominated by Dr. Ian Dohoo, professor emeritus of epidemiology at AVC and a past winner of the award. His nomination was supported by Dr. Matthias Grenier, University of Veterinary Medicine Hannover, Germany, and Dr. Wesley Johnson, professor emeritus, University of California, Irvine.

In his nominating letter, Dohoo said that it was Gardner’s stellar reputation as a veterinary epidemiologist that enabled the University of Prince Edward Island to garner one of only 19 CERCs awarded to universities in Canada in 2010.

He is internationally recognized for developing methods to assess disease risk in terrestrial and aquatic food animals. These methods have been used in global veterinary and public health activities, and have influenced policies at the United States Department of Agriculture and the World Organization for Animal Health.

He is among the most cited researchers in his field, with more than 300 peer-reviewed scientific publications in leading journals, such as Preventive Veterinary Medicine, American Veterinary Medical Association, and Veterinary Pathology.

“Besides his outstanding achievements as scientist, researcher, and scientific leader and his superb records of research grants and academic awards, it is his reputation as academic teacher, his specific interpersonal attitude, the inspiration he is able to provide and deep humanity that makes him a role model for professionals truly engaged in knowledge generation and knowledge transfer,” said Dr. Greiner in his letter of support.

On May 21-22, CERC sponsored a workshop on the use of small unmanned aerial systems (sUAS) for environmental research. The workshop provided the audience with a thorough understanding of the capabilities and limitations of various SUAS platforms. Attendees learned what it takes to successfully implement sUAS and how the technologies may benefit various research applications.

The first day of the workshop had a variety of presentations on sUAS use cases, systems, architecture, and procedures among many others. For the second day of the workshop, participants met at Tea Hill Park for a hands on experience of managing and flying missions.

Below is a video summary of both days with interviews of some of the participants. 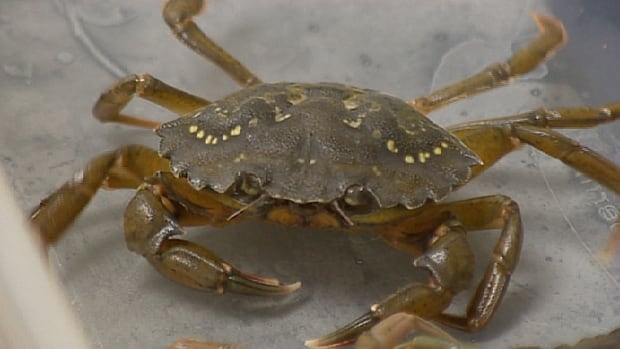 The green crab is an invasive species from Europe that has the potential to devastate shellfish fisheries in Atlantic Canada. Lab experiments show a green crab can eat up to 30 young oysters in a single day.

It’s been proposed in the past that a management plan could be created that includes harvesting green crabs for meat. This had been determined unfeasible, because the moutling schedule of the crab was, until recently, unknown.

Dr. St-Hilaire’s team has “cracked” that code, and is working with fishers, processors, and chefs to help.

“What we’re trying to find is a product that will be of high enough value that it’s economically feasible for commercial fishermen to sell it,” said St-Hilaire. 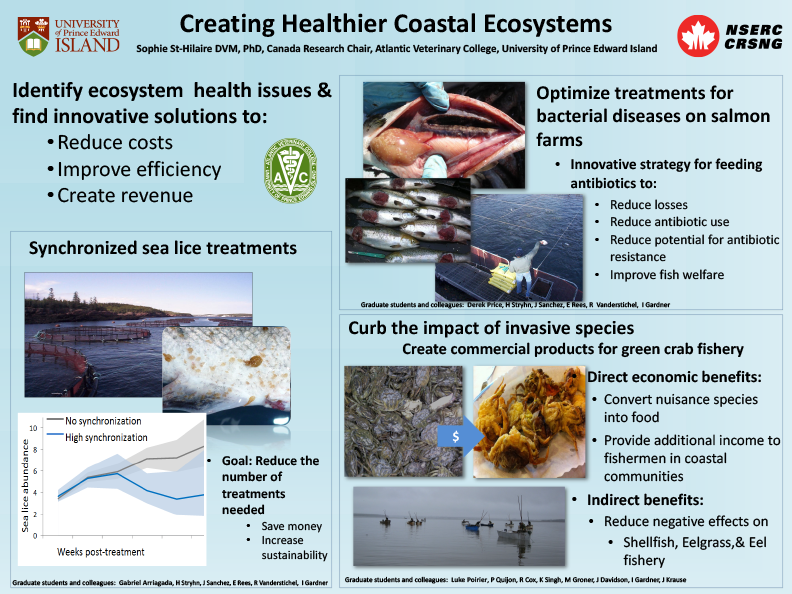 “MSX is a disease that can seriously affect the oyster industry,” said Dr. Jeff Davidson, a professor of aquatic and ecosystem health at the Atlantic Veterinary College at UPEI. “The industry on the Island takes it very seriously. We’ve been extremely lucky to not be affected thus far. That’s why this research is important for both prevention and mitigation.”

MSX is a shellfish disease first reported in the 1950s in the state of Delaware. Caused by a parasite, the disease has since spread along the eastern US seaboard, including an outbreak in Nova Scotia in 2000. 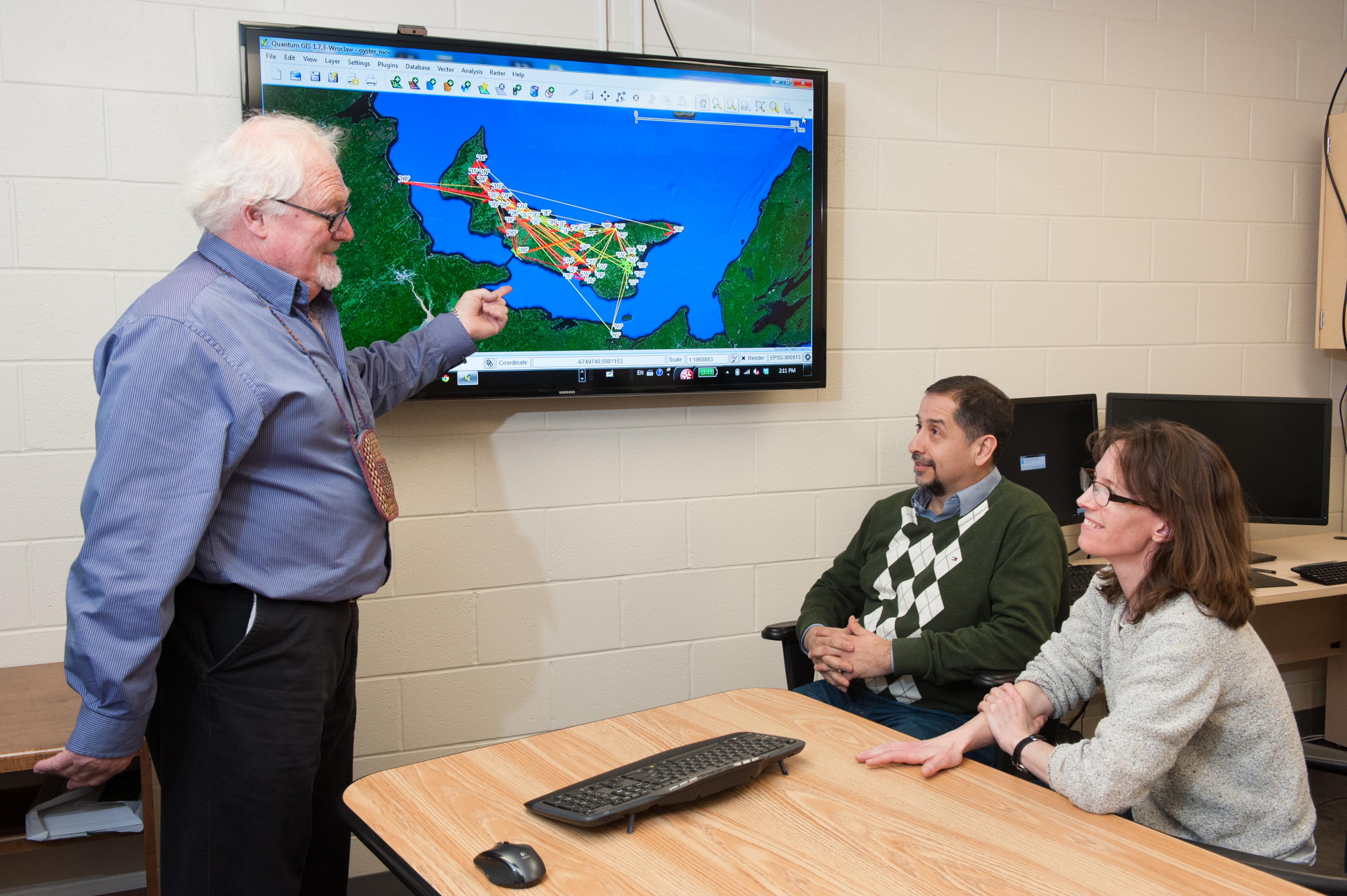 “When an outbreak of an infectious disease occurs, the initial investigation identifies the source of the problem, and tracing the chain of movements of the affected animals is carried out ,” explained Dr. Davidson. “After the fact, that’s a really difficult thing to do. Food is moved from producer to processor to wholesaler to market, but it can take a complex journey to do so. If we can map this movement before—heaven forbid—we have an incident, we’re already several steps ahead of the game.”

Dr. Davidson is working with Dr. Sophie St-Hilaire, UPEI’s Canada Research Chair in Integrated Health Research for Sustainable Aquaculture, and Dr. Javier Sanchez, an associate professor of epidemiology and a specialist in risk analysis. Together, they’ve created a network analysis—essentially, a map which plots the movements shellfish make from producer to market.

“Co-operation from the industry through the first round of this mapping project has been excellent,” said Dr. St-Hilaire. “With their data, we’ve been able to identify what we’re calling the ‘hot spots’ on Prince Edward Island. These are places of high traffic, where shellfish seed are collected and distributed to several locations. These would be the areas to watch in case of an outbreak, and they’re spots that should be monitored regularly from a food safety surveillance perspective.”

The AVC team has brought in scientists from The Virginia Institute of Marine Science.

“Their expertise in MSX is invaluable,” said Dr. Sanchez. “They can help us look at the pathways and movement of the parasite and disease, based on their own experiences.”

The next phases of the project include creating mitigation plans for possible future outbreaks. The team is also investigating ways that industry can constantly update the network analysis map.

“That’s crucial,” said Dr. Sanchez. “Our current map is a snapshot of the movements of shellfish on PEI as they exist right now. But those pathways change as harvesters switch processors and so on. We want to create a resource that, at any point, we can stop and say: this is how shellfish move across the province.”

The shellfish network analysis is a project of the Canada Excellence Research Chair (CERC) in Aquatic Epidemiology, the federal Department of Fisheries and Oceans (DFO), the provincial Department of Fisheries, Aquaculture, and Rural Development, the Canadian Regulatory Veterinary Epidemiology Network (CRVE-net), the Canadian Food Inspection Agency (CFIA), the PEI Shellfish Association, and the PEI Aquaculture Alliance.

“More than 70 per cent of the mussels eaten in North America come from Prince Edward Island,” said Dr. Ian Gardner, UPEI’s CERC in Aquatic Epidemiology. “We’re helping to ensure the safety of this food for consumers through an exciting project being carried out by Dr. St-Hilaire, Dr. Sanchez and Dr. Davidson. The end product is beneficial to both the industry and to the consumers of shellfish in North America.”