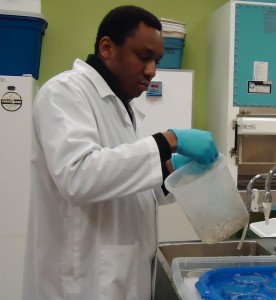 I am a post-doctoral fellow with Dr. Mark Fast. With financial support from CERC (Funding for Short-Term Research Placement) I visited Dr. Frank Nilsen’s lab at the Sea Lice Research Centre (SLRC) at the University of Bergen, Norway, for 1 month.

While at SLRC, I was trained in the use of RNAi, a technique for gene knockdown used frequently in Dr. Nilsen’s lab, for studying important pathways in Lepeophtheirus salmonis. Working with bioinformatics support from SLRC, I identified several key markers of the chitin biosynthetic pathway (1) Glucosamine:fructose-6-phosphate aminotransferase (GFAT) which catalyses formation of glucosamine 6-phosphate and is the first and rate-limiting enzyme of hexosamine biosynthetic pathway. The final product of the hexosamine pathway, UDP-N-acetyl glucosamine, is an active precursor of numerous macromolecules containing amino sugars, including chitin in fungi and arthropods; (2) UDP-N-acetylglucosamine pyrophosphorylase (UAP), and (3) chitin synthase (CH) 1 and 2. 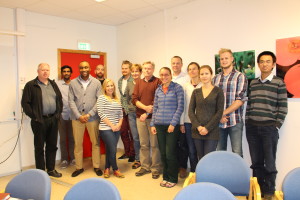 I obtained full length sequences for each of these four genes, and with assistance from SLRC conducted phylogenetic analyses of each gene, further confirming their importance. Knock-down (KD) of transcription of these genes in nauplii I-II stage larvae through RNAi resulted in deformed phenotypes and major behavioural changes in the copepodid life stage in GFAT and CH1 KDs. UAPs also exhibited an altered phenotype in approximately half of the individuals with KD, and may be the result of incomplete KD because of the presence of 2 UAP genes as has been found in some other arthropod species. There was no impact on phenotype of CH-2 as well as three different controls.

I am grateful to CERC for the Short-Term Research Placement Award.