Thitiwan’s education background is in Veterinary Epidemiology. She received her DVM and MSc from Kasetsart University, Thailand and completed her PhD (Veterinary Epidemiology) at University of Prince Edward Island, Canada. She has been trained in both qualitative and quantitative analyses. Her research involves the application of modeling and GIS to understand animal health. Her recent research projects have been focused on aquatic epidemiology using mathematical models to understand the population of vase tunicates, fouling on mussel farms, and to describe the spatial and temporal patterns of sea lice infestations on wild Pacific salmon in the Broughton Archipelago, British Columbia, Canada.

Thitiwan’s current research is on sea lice infestations of wild and farmed salmon in British Columbia. She manages the combined data from different sites on the west coast of Canada, which will be used to study host-parasite interactions between wild and farmed salmon, and salmon migratory patterns. Thitiwan is also involved in various other projects, including assessment of risk factors associated with early mortality syndrome (EMS/AHPNS) occurrence on shrimp farms in Thailand, investigation of relationships between fish size and sea lice intensity on wild Pacific salmon, and the use of system dynamic models of sea lice abundance on isolated salmon farms. 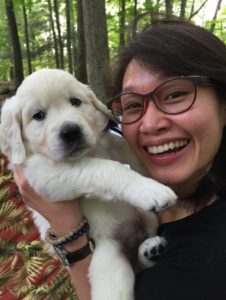