The Symposium occurs every four years and brings together more than 300 international aquatic health experts. At the symposium, I presented a poster about the influence of gender ratio on the establishment of a marine ectoparasite. The poster describes statistical analysis and modelling that shows, for the first time, how the gender ratio of sea lice on farmed fish is a key determinant of parasite population growth and control. This work is relevant to the control of any dioecious parasite species. The presentation highlighted the evidence-based science undertaken at UPEI that advances the control and prevention of aquatic disease. The abstract of the poster follows.

The Influence of Gender Distribution on the Reproduction and Transmission Dynamics of the Parasitic Salmon Louse Lepephtheirus salmonis on Wild Salmon in British Columbia, Canada.

For any commercially or ecologically important parasite species, it is necessary to have a detailed understanding of the mating system in order to inform effective management and prevention strategies. This work focuses on the salmon louse, Lepeophtheirus salmonis, a parasitic copepodid which has a deleterious effect on wild and farmed salmon. As a dioecious species, it reproduces sexually on a host, with adult males forming mate-guarding pairs with pre-adult females [1]. Little is known about the distribution of each gender on the salmon hosts or about the gender ratio of the lice. Both of these factors will have marked consequences for successful reproduction of L. salmonis and, therefore, on parasite burdens.

Here, we analysed a dataset consisting of more than 160,000 wild fish sampled between 2003 and 2012 in British Columbia, Canada. Life stage and gender of all L. salmonis on each fish was recorded. We investigated the influence of gender ratio and aggregation on the reproductive potential of the parasite population. Approximately 30% of fish were infested with at least one mobile louse. The gender ratio of lice on individual fish was male-biased in all years. Mobile lice of both genders were aggregated, with males tending to be more aggregated than females. As aggregation increased, the probability of mate pairing increased. The monthly mean proportion of hosts infested with at least one male and one female louse was 0.018 (±0.015 95%CI) and the monthly mean probability of a female louse being able to mate was 0.217 (±0.076 95%CI). Comparison with expected values, calculated using models of dioecious parasites [3], showed that male and female lice tend to aggregate on the host population. The models demonstrate that the level of aggregation of male and female lice has a considerable influence on the probability of reproduction. If males and females aggregate on the same host then the probability of reproduction can be many times higher than if the males and females tend to aggregate on different hosts (for the same value of mean lice abundance). The results have implications for a number of aspects of salmon health and management, including the validity of lice population abundance estimates on wild or farmed fish when lice counts usually only record female adults, and the precision of salmon lice population dynamic models. 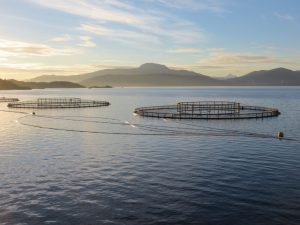 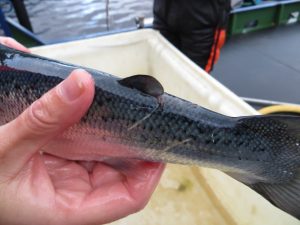 Female lice with egg strings on a salmon