A Walk on the Edge
by Adam Mahar 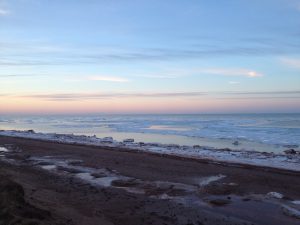 As I step to the edge of Prince Edward Island, on the north side, each one of my senses is overwhelmed with what I see, feel, hear, and smell. I look to the left and I see what looks to be miles of white sands and red cliffs, sea ice pushed up on the shore, and the sky with all the colors of the rainbow. I look to the right and I see the same thing, except I see large sand dunes off in the distance. I am at Dalvay Beach, between Stanhope and Tracadie Beach, which is one of my favorite spots to go and relax because it is so quiet. I have lived on Prince Edward Island my entire life and have visited almost every beach this island has to offer, yet there is something about Dalvay that keeps me coming back. Maybe because it is so close to my house, but my wife and I have spent many hours at this spot, walking along on the edge of PEI. Normally, we watch as the waves crash along the coastline. We watch as the seagulls and crows play in the wind, swooping up into the air, and then dive-bombing down into the water looking for fish to eat. We watch the seals playing in the waves, following the fish as they swim up and down the coastline. We smell and taste the salty sea air as we take in deep breaths through our noses, and exhale the salty fresh sea air through our mouths. We grasp the sand between our toes and in our hands, as we feel the warmth of the sand basking in the sun. We look for treasures washed up on the shore, hoping to find sea glass, driftwood, seashells, or if we are lucky maybe even a sea dollar. The sound of the waves crashing in on the shore and the smell of the salty sea fades into the background, as I become one with my environment. I begin to melt into the edge of PEI, as I imagine where this boundary ends and the new one begins, from land to sea to air. 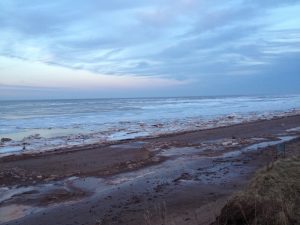 All of these feelings rush over me every time I step to the edge of Prince Edward Island; however, my phenomenon or experiences of walking on the edge has changed since I began my academic career in Island Studies. No longer can I step to the edge of PEI and not think about islandness, boundedness, resiliency, vulnerabilities, and connectedness. This is the first time I have actually been on an island beach since I began my studies of islands, and it has changed my experience. Now I wonder what that walk on the edge would have been like for early settlers on Prince Edward Island. As I walk on the edge of PEI, I am fully aware of what is beyond what I can see as I look out. I know that to the north side of PEI, Newfoundland and Québec are there, and on the south side you can see New Brunswick and Nova Scotia. Imagine looking out from the edge of PEI and not knowing what is out there, or if there is anything at all. As I walked to the edge on this day I tried to emerge myself within that perspective. How impactful would that be to my sense of “islandness,” if I were unsure that a world existed outside of PEI? Standing on the beach, as I look out to the sea, it looks like the sea ends and then falls off a cliff to nowhere. To me, that unknown changes everything. To believe there is nothing else and that you are the center of the world would intensify my connection to the land and nature. 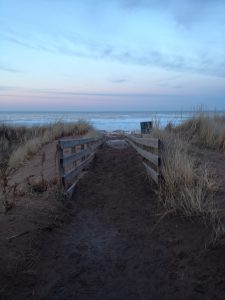 However, I have never felt that the edge of PEI is a boundary, especially in today’s day and age, with social media and the availability of transportation. To me, the coastline is not a boundary or an edge; it is just the merging of two different ecosystems. For me, the edge or the coastline is a place of assimilation, where ecosystems and species merge together to create an environment that is unique and inclusive. The edge is a mix between the known and the unknown, the familiar and the unfamiliar, the comfortable and the uncomfortable. To me, walking on the edge is about opportunity, nature, self-introspection, and treasures. The edge is a place for change and a place for growth. To me the edge is my sanctuary, my happy place.