Still heavy cloud cover so viewing starting at noon is not likely. Telescope will be set up, but it may not be possible to see the Sun until near 1pm or even later. It’s hard to predict, so if you start seeing lots of sunny breaks, that means there’s a chance of viewing the transit. Keep an eye on the Twitter feed on the sidebar of this webpage – I’ll post more regular updates there.

The viewing is still tentatively on for 12:00-1:30PM, with the possibility of some clouds getting in the way. The forecast says that the sky will be clearing around noon, so I will set up the telescope to start the viewing and depending on how the clouds move through the sky, there may be periods where we have to wait for a clear view of the Sun.

UPDATE (morning of Sun, May 8)

The current forecast for the transit viewing time is partially cloudy, but it looks like it’ll be clearing up shortly after that time (the area highlighted in red on the screen-captured chart from Clear Dark Sky below).

A successful viewing is going to depend on where in the sky those clouds are – if they’re blocking the Sun, we can’t view it – so I can’t say for certain that the viewing won’t go ahead at noon on Monday. All I can say is that if the viewing is going to be shifted from the scheduled time, it will be shifted to a bit later in the afternoon (the transit ends at 3:40 PM). Updates will continue to be posted here and on @UPEIAstronomy on Twitter.

Mercury’s orbital path will soon take it in front of the Sun (from our perspective here on Earth) in what is called a “transit”. It will look like a little black dot moving across the Sun’s surface (see image below or an animation here). This is very much like an eclipse, it’s just that Mercury is too far away and too small to block out our view of the Sun entirely like the Moon does during a solar eclipse. 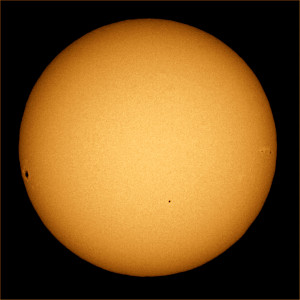 The last transit of Mercury on May 4, 2006. Mercury is the little black dot in the lower middle of the Sun.
Photograph from Wikimedia Commons (https://upload.wikimedia.org/wikipedia/commons/6/64/Mercury_transit_2.jpg)

Since Mercury will appear so small against the Sun’s surface, we will use our solar telescope to view the transit. We’ll have a public viewing of the transit on Monday, May 9, tentatively from 12:00-1:30 PM (so that people can come during their lunch breaks). If it looks like clouds will interfere with the lunch-time viewing, then it may be shifted to the morning (as early as 9:00 AM) or the afternoon (as late as 3:30 PM), whenever the sky is clear enough to see the Sun. This post will be updated nearer to the date of the transit with more precise times. The viewing location will be in a grassy area near the University Avenue entrance to campus, as indicated on the map below.

The viewing location will be near the University Avenue entrance to campus, somewhere in the grassy area between the W.A. Murphy Student Centre (building #4) and Kelly Memorial Building (building #11). Visitor parking is available nearby in the lots labelled “VP”.

If you can’t attend the public viewing (or if it’s cloudy here on PEI), you can watch the transit online courtesy of Slooh (beginning at 8:00 AM Atlantic time). Whatever you do: don’t look at the Sun without proper protective equipment for solar viewing. Sunglasses are not enough; your eyes will be damaged!