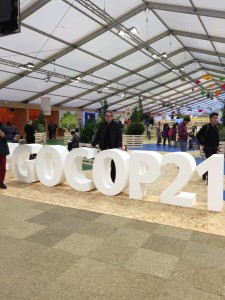 I am in Paris this week for the climate conference seen as the last “do or die” chance at getting the world’s greenhouse gas emissions under control to limit the human increase in global average temperature to 2°C, above which is considered a “dangerous” level. Presently, 183 countries have submitted their intended plans for greenhouse gas reductions (the country of Pulau tabled their intentions this past weekend). So far, these do not total up to a reduction of greenhouse gas emissions that will keep the global temperature increases below the dangerous level, and with two weeks of intense negotiations ahead, I think that it is already clear that countries will not be able to do so. So what next? The public is looking for a magic solution to solve this crisis. Scientists call these geoengineering solutions, that is, ways in which humans can manipulate the global climate system and reduce the impacts of climate change. Lets take a look at three examples being considered, no matter how far fetched, including putting small particles high up in the atmosphere to deflect incoming solar radiation, seeding the world’s oceans with iron dust, and placing large mirrors up in space to reflect the sun’s rays.

Scientists have known for years the impacts that volcanoes have on the global climate. Not all volcanoes but those that spew their dust particles high up into the atmosphere where they deflect the solar energy entering the Earth’s atmosphere, thereby lowering global temperatures. The most recent example is the eruption of Mount Pinatubo in the Phillipines on 15 June 1991. It injected more particles into the stratosphere than any eruption since the Krakatoa Volcano in Indonesia in 1883. Over the following months, the aerosols formed a global layer of sulfuric acid haze causing global temperatures to drop by about 0.5°C in the year 1993 including right here on Prince Edward Island. Many scientists are now proposing that we do not wait for the next large volcano and pump particles into the high atmosphere ourselves. Some people are bold enough to try it themselves. The former co-chair of the Intergovernmental Panel on Climate Change (IPCC), the world’s leading authority on global warming, Dr. Yuri Izrael experimented with his hometown of Tbilisi in the eastern European country of Georgia by releasing sulphur dioxide particles into the lower atmosphere. These had the result of lowering the local temperature by scattering the incoming solar radiation. It probably also affected the local air quality so I would not recommend any more of these experiments.

Seeding the ocean with iron dust was suggested by oceanographer John Martin more than 15 years ago. Iron acts as a fertilizer for many plants, and some, like the phytoplankton that form the base of the marine food web, need it to grow. Adding iron to the water stimulates phytoplankton growth, which in turn gobbles up carbon dioxide through photosynthesis. The resulting decrease in carbon dioxide should help reduce temperatures since it is one of the main greenhouse gases responsible for global warming. Some scientists theorize that adding iron to the Southern Ocean alone could reduce carbon dioxide levels by 15 percent. And some are even ambitious enough to try it themselves. In July 2012, Russ George, an American businessman and entrepreneur, led an iron fertilization experiment spreading 100 tonnes of iron sulphate into the Pacific Ocean from a fishing boat in an eddy 200 nautical miles west of the islands of Haida Gwaii off Vancouver Island, British Columbia. Results showed increased algae growth over 10,000 square miles as well as a quadrupling of the local 2013 salmon runs from 50 million to 226 million fish.

Putting gigantic mirrors in space to redirect sunlight away from the Earth and thereby lowering global temperatures is another proposed geoengineering solution being considered by scientists. The mirrors would orbit at Lagrange point L1, a gravitationally stable point between the Earth and the sun that is about four times the distance from the Earth to the moon The mirrors would barely be visible from Earth and would block just 1 percent to 2 percent of the sun’s light, but scientists say that would be enough to cool the planet. Launching mirrors combining to an area of 1.5 million square kilometres (almost the size of Greenland) would be prohibitively expensive though at about $10,000 per pound.

All of these geoengineering solutions need to be examined carefully, often with the precautionary principle in mind. The precautionary principle states that if an action has a suspected risk of causing harm, in the absence of scientific consensus, the burden of proof that it is not harmful falls on those who would take the action. The side effects of these large-scale proposals are not yet known. Better not play with Nature any further than we already have with our global warming experiment.