Honeywell Aerospace, located in Slemon Park, PE, is a high-volume business specializing primarily in the repair and overhaul of various aircraft components for commercial and private use. Specifically, this site repairs and overhauls fuel control units, referred to as Hydromechanical Units or HMUs. These units are repaired at the facility due to the various faults that may develop in the units over their lifetime of service.

To validate repair and overhaul procedures, each HMU goes through a final test procedure. This procedure involves attaching the HMU to a hydraulic test stand. This hydraulic test stand simulates the conditions of operation of the HMU by transmitting electrical signals, exerting hydrostatic pressure, and circulating fuel within the unit.

The current setup and teardown procedure for each test is time intensive and involves attaching and detaching several hoses and connectors to the HMU from the test stand. These long change overs limit the facility’s HMU throughput and in turn limits revenue.

In response, Honeywell worked with the Fuel Fighters team to design a solution to reduce the time required to setup and teardown the HMU from the test stand both before and after the hydromechanical testing is performed and completed. 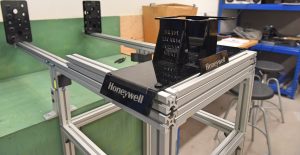 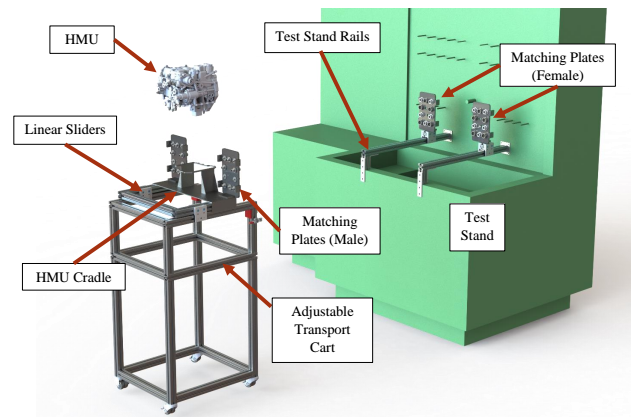 HMU from Test Stand to Table 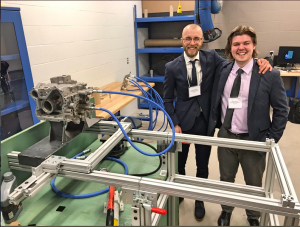 From Fuel Fighters testing results of their final design, the time required for setup and tear down has been reduced by approximately 6 minutes. The was made possible as the winching process and the multiple threading of hoses and adapters into the HMU are removed from the current process. 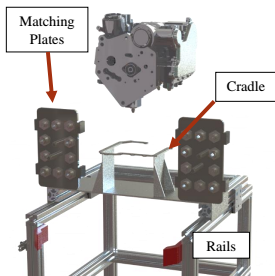 The cradle part of the design , which the HMU is mounted to, is designed to slide on the rails using ultra-high molecular weight polyethylene (UHMWPE) linear bearings. Multi-coupling fittings, housed in a matching plate, are mounted to the cradle design above the position of the rails.This unit,composed of the transport cart, cradle, HMU, and matching plates is then able to be transported from the assembly area to the testing area of the facility. 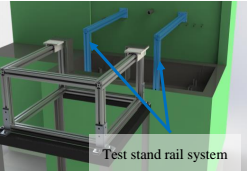 Complementary rails are located and affixed on the test stand which align with the rail system on the transport cart. 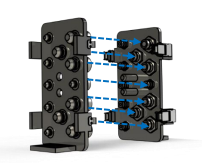 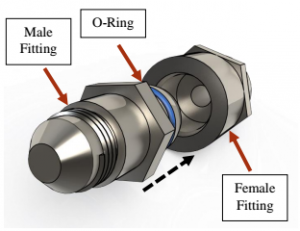 The design of the fittings allows for connection similar to a quick-connect fitting with no flow restriction in terms of shape and geometry, with an inner circumferential O-ring seal to restrict the movement and leaking of fluid. 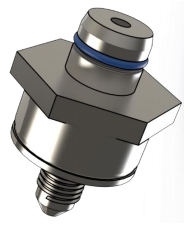 The O-Ring is the essential component of the fitting’s seal and they have been extensively researched and selected based on chemical compatibility, durometer, elasticity, effective temperature range, compression set, and expansion

This design was validated by various tests and analyses as listed below.

The considerations of the current setup and process flow at Honeywell Aerospace were found throughout the development of the proposed design solution. This was done to ensure that the implementation of the design would not lead to prolonged periods of test stand downtime – leading to a reduction of revenue during the installation period, and to provide a seamless transition to the new process flow with the design.

The following process flow is representative of the changes made to the process using the new design: 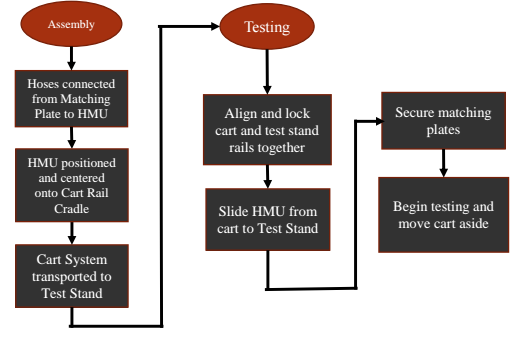 The implementation of the proposed system represents a substantial (5.9 minutes and 5.4 minutes from the winching process and an additional 4 minutes by removing the individual hose connections) decline in the amount of time required to setup and teardown an HMU on the test stand, at Honeywell’s Slemon Park facility. This allows more units to be passed through the testing phase, thus, increasing throughput and revenue for the client. It is also a modular solution that can be adapted and scaled to be implemented onto other test stands and HMU models, to bring Honeywell closer to their long-term goals, in terms of increased repair and overhaul capacity. 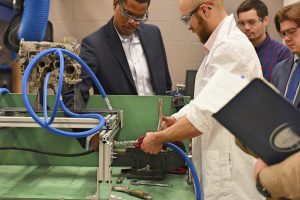 This setup solves the client’s problem by removing the need for Honeywell technicians to connect each hose individually, as well as removing a time-consuming winching process.