News of Hurricane Arthur heading towards Prince Edward Island this weekend and dumping from 50 to 100 millimetres of rain with winds up to 100 kilometres per hour has the Island in a bit of a tizzy. Several weekend events in Nova Scotia have already been cancelled or postponed in anticipation of Arthur’s landfall. Concert organizers on P.E.I. are watching closely. I’ve been asked many times today, “Isn’t it a bit too early in the season for a Hurricane to affect P.E.I.?” Well, July is not too early at all. A new student to the UPEI Climate Lab, Jerry Jien, has been examining the historical records for hurricanes and has come up with some interesting facts about how hurricanes impact Prince Edward Island.

When we talk about hurricanes, we are really talking about large storms known as tropical cyclones. Most of the typical storms that we experience here on Prince Edward Island are the result of weather frontal systems coming in from the west or from the north. Tropical cyclones, however, are storms that come from the south with a characteristic cyclonic rotation around a central core or “eye” of the hurricane, with low atmospheric pressure and high winds. Tropical cyclones are formed in warm tropical waters of at least 28 degrees Celsius closer to the equator. Heat is drawn up from the oceans creating a ‘heat engine’ of tall convective towers of clouds formed within the storm as the warm ocean water evaporates. As the air rises higher, it cools and condenses releasing latent heat which causes even more clouds to form and feed the storm. Most of these tropical cyclones are accompanied by lots of rain and storm surges along the coastlines.

Jerry examined all 338 storms that have affected Prince Edward Island since the year 1851, that is, all tropical cyclones that have travelled within 500 kilometres of the Island, known as a hurricane’s “zone of influence”. He found that July is not too early for tropical cyclones to impact P.E.I. In fact, 7 percent of all tropical cyclones impacting P.E.I. since 1851 occurred in July, 4 percent in June, and 3 percent in May. Surprisingly, the earliest tropical storm on record impacting P.E.I. in any given year occurred in February of 1952! Most of the tropical cyclones occur in September (38%), October (24%) and August (21%) with a few tailing off in November (3%). We only have to go back to 2006 to find a tropical storm that impacted P.E.I. earlier in the year than Hurricane Arthur – June 15, 2006 to be precise which brought 26 millimetres of rain and wind gusts of over  54 kilometres per hour.

Everyone asks the question: “Will climate change increase the number of hurricanes affecting P.E.I.?” The Intergovernmental Panel on Climate Change (IPCC), the global community’s scientific authority on climate matters, released its Fifth Assessment Report (AR5) last year concluding that they were “virtually certain” that there had been an increase in intense tropical cyclone activity in the North Atlantic since the 1970s; and “more likely than not” that these intense tropical cyclones would increase in the North Atlantic in the late 21st Century. They did conclude that there was “low confidence” that humans had any influence on these observed increases in tropical cyclone intensity. Preliminary results from Jerry’s research have concluded a similar increase in tropical cyclone activity affecting Prince Edward Island (see graph below). Jerry will continue his Ph.D. work on tropical cyclones, and we’ll report any further findings at a later date. 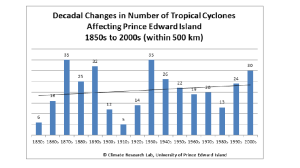