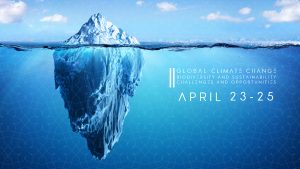 All 195 states in the United Nations recognized under the 2015 Paris Climate Agreement that “climate change represents an urgent and potentially irreversible threat to human socities and the planet”. Groups such as the European Parliament have described Climate Change,

Biodiversity and Sustainable Development as “the greatest challenges of our time”. Recognizing that the well-being of humankind is severely affected by climate change and biodiversity loss and that it depends on healthy and resilient ecosystems, the integration of these issues is imperative.

Presented by the Canadian University Dubai (conference host) and the University of Prince Edward Island, this international conference will examine the challenges and opportunities for integrating the three issues of global climate change, biodiversity and sustainability. The conference will provide a collection of keynote speakers, panel discussions and training sessions as well as study tours of the host city, Dubai, and its surroundings.

The University of Prince Edward Island, through the Climate Lab, is hosting an international public-policy-focused symposium on adapting to a new human health reality under climate change.

This symposium will examine the state-of-the-art-science with regards to climate change and human health, and allow discussions that will hopefully guide jurisdictions to build and implement adaptation policy, and build resilience to the effects of climate change.  The symposium will be organized around the key themes of vector borne diseases; mental health; perinatal health; emergency and disaster management; and indigenous people’s health.  It will bring together climate experts who may not have considered the significance of human health, and human health experts who may not have focused their attention on climate change.  Together with an invited group of audience participants from government, industry and non-governmental organizations, this symposium will address the pressing issue of climate change and human health in an action-oriented and policy-focused series of dialogues. 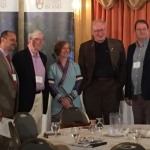 The Symposium brought together 16 speakers from around the world to discuss how residents of small islands and coastal jurisdictions can build on their strengths and resourcefulness to respond to the consequences of climate change. The focus was on four areas: food security, renewable energy, innovation, and cultural heritage. Co-chaired by Dr. Jim Randall, co-holder of the UNESCO Chair, and Dr. Adam Fenech, director of the UPEI Climate Lab, the symposium was funded in part by the Atlantic Canada Opportunity Agency (ACOA) and the province of Prince Edward Island.

Symposium speakers included climate and island studies experts who who brought their unique knowledge and skills to the table. They come from Australia, Vanuatu, Denmark, Faroe Islands, Gotland, Montreal, Toronto, St. John’s, Tignish, Lennox Island, and Charlottetown. Together with an invited group of engaged audience participants, the symposium addressed the pressing issue of climate change and small islands in an action-oriented and policy-focused series of dialogues that will provide public policy lessons for other jurisdictions. 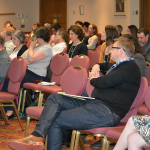 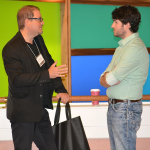 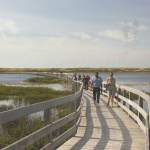 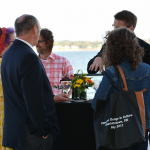 A conference hosted this month by UPEI will examine climate change through the focus of a humanities lens, and will seek to broaden our understanding of the ways in which climate and culture intersect. Climate Change in Culture runs May 28-31 at the Delta Charlottetown, and is generously supported by a Connection Grant from the Social Sciences and Humanities Research Council of Canada, the PEI Department of the Environment, the University of Prince Edward Island, and the Institute of Island Studies.

‘This conference draws together leading and emerging scholars from around the world, along with private-sector, governmental, and public policy stakeholders,’ said Dr. John McIntyre, Associate Professor of English at UPEI and chair of the Climate Change in Culture conference. ‘Participants include historians, political scientists, psychologists, literary critics, anthropologists as well as architects, land use planners, and private consultants. The four-day event will also showcase contributions from artists, musicians, and film-makers, thus drawing together a wide range of expertise bearing upon the cultural response to climate change.’

‘UPEI is delighted to host this innovative and cross-cutting conference, one that builds on the university’s current strengths in climate change research and provides new opportunities for our faculty in the humanities,’ said Dr. Robert Gilmour, Vice-President Research and Graduate Studies at UPEI. ‘We look forward to hearing and learning from experts from around the world as they explore the interplay between climate change and the humanities.’

The conference is for registered attendees only, but community member day-passes are available for purchase at a cost of $25 at https://www.climatechangeinculture.com/

The UPEI Climate Research Lab is hosting a one-day symposium on Tuesday, March 11 entitled “Climate Change and Aquaculture: A science symposium to communicate current research and science activities to the Atlantic Region’s aquaculture industry.” The event will be held in the Lecture Theatre, Main Floor, Regis and Joan Duffy Research Centre, from 9:00 am-3:00 pm. Lunch will be provided to registered participants in the adjacent meeting room. There is no fee to attend the seminar, but space is limited and pre-registration is required.

Topics include the impact of climate change and ecosystem health on aquaculture, preparing for climate change, and private sector responses to storm surges. This event is funded by the Atlantic Canada Adaptation Solutions Association (ACASA), a partnership of the four Atlantic provinces and Natural Resources Canada to support adaptation to climate change in the region.

Planning for Risk under a Changing Climate
May 3, 2013

How will climate change impact our roads, bridges, and sewers? Join us for a free workshop, Planning for Risks Under a Changing Climate. From waterfronts to roads to bridges to storm sewers, there will be speakers from across the Atlantic region talking about how jurisdictions have adapted their major infrastructure to future climate changes. The event is topped off by a climate change video produced by Mount Allison University Professor Ian Mauro starring many Islanders identifying how they have already experienced the impacts of climate change.

“PEI’s Changing Climate: Results of the Atlantic Regional Adaptation Collaborative on Climate Change” is a symposium sponsored by the province of Prince Edward Island, the government of Canada, and the University of Prince Edward Island. The Atlantic Regional Adaptation Collaborative (RAC) of planners, engineers, and multiple levels of government have created resources to assist communities in land-use planning and in protecting valuable infrastructure when facing the challenges from climate change. The conference will feature: – the results from PEI’s climate-change adaptation efforts under the federal/provincial collaborative including coastal-erosion-hazard mapping, shoreline classification, sea-level-rise hazard mapping, and coastal-change mapping – a report on climate changes that have occurred on Prince Edward Island over the past 50 to 100 years, and projections of future climate changes anticipated on the Island over the next 100 years – a panel of community representatives speaking on their vulnerability to climate change – training on (1) conducting climate-data analysis to understand past, local climate changes; (2) understanding projections of future climate change for your community; (3) understanding precipitation intensity, duration, and frequency (IDF) curves for infrastructure planning; and (4) coastal mapping.