Edges near and far

I drove to the edge this evening, and I was reluctant to do so. I knew the purpose was to get my colleagues and me thinking about islandness and what does ‘the edge’ mean to those living on or visiting islands, but I knew to go to the edge would only reaffirm what I already knew: this Island is not my home. Steeling myself with purpose, I pulled my car into the curve of Brighton Shore and with my youngest sleeping soundly in the back, I stepped out to the edge. Immediately, my eyes were drawn to the water, rippling dark beneath a skimming of translucent, gray ice. I knew, even in the darkness, that the jagged rocks skirting the shoreline were an Island red. Across the water and on each end of her shore there was the twinkle of lights from homes, businesses and lamp posts. 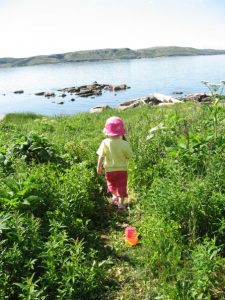 I have spent my lifetime on edges, the more I try and focus on this edge, the more my mind drifts to other edges, my edges, which are far from here. They exist off the shores of Labrador, where the sea is more continuous than the land. These waters, edged by slabs of smooth, grey rock or a jumbled variety of the same, are hard and weathered; they are salty and filled with the cries of seagulls and pounding surf, smelling of berry bogs and sea mist. 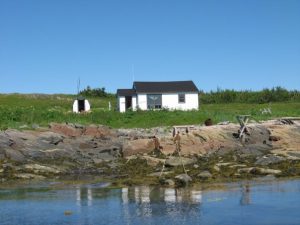 My edges quickly give way to coarse, moss covered terrain, turning lumpy and soft as you go further inland. Under a large July sun, I can sit at my edge and see other shorelines, like Hare Island and The Bottom. Places, where family cabins dot the shores and favored berry spots are hiding. Winter edges bring large skies filled with dancing light displays.

Tonight, I look down the curve of the edge that isn’t mine and note the lighthouse standing at the base. Is it functional? Decorative? Historical? Amazed, I realize that I don’t even know, have never given thought to this until now. I suppose, Google could tell me, and indeed, later it did. A quick search told me that the Brighton Beach Range Light (such a grand name!) is a heritage property in PEI[1], given all the protections and legal logistics that go with it. I should not be surprised, most shores on this Island have a lighthouse nearby, surrounded by sand, or atop dunes of the same, they give testament to the fact that here, more than ever, I am surrounded by water.

My edges have no lighthouse, working or otherwise. Its shores can be navigated only by those who know how. Those who don’t, end up providing an unwitting namesake to the place of their ignorance. Such is the case of ‘Perry’s Head’, a large, round boulder sitting just below the surface of the water near the shore. It was so named after Perry, who unaware of the rock, hit it and so damaged his boat and his pride, as to this day whenever pulling into the shores of Hare Harbour, the locals will caution – look out for Perry’s Head!, to the navigator of the boat.

Nightfall on the Brighton Shore brings to life a smattering of light poles, the occasional head beam from passing vehicles, and of course, the lighthouse. My edges bear no such lights. Only stars, moon and cabin lanterns dot her landscape, yet her beacon pulls me like a magnet each year to return to her shores.

I consider my time is up on this edge, on this night; it is chilly, and the dog walker is tossing wry glances my way on her second pass. I guess it is somewhat strange to see a woman standing, looking out over the water on a January night. I walk back up the little embankment to my vehicle. Opening the door I am met with warmth, my son still asleep in the back, unaware of the emotions wrought upon his mother by a trip to the edge. I sit for another few moments. Directing my gaze to the harbor before me, I wonder if this view will ever stir nostalgia for me. Maybe, when my kids are grown, I’ll look on this shore and remember their childish faces, hear their laughter from the splash pad across the street and long for those moments back. But even this thought is of little comfort, as the foreshadowing of those memories reminds me that their edges will not be mine. Mine are slipping from me, while theirs are just a short drive away. 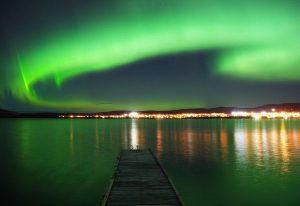 PHOTOS
This first photo is of my oldest when she is about 3, walking down to the water’s edge from Poppy’s cabin on Hare Harbour.
The second is a view coming into the harbour of my dad’s cabin. You can see the crumbled ‘sticks’ from an old wharf in front, now firewood.
The last is of the Northern Lights, I tried to find a good one from ‘my’ island, but I couldn’t. This one is taken from the shores of Wabush Lake, photo credit belongs to Larry Jenkins.