Walk on the Edge: Water, Ice, and Love

On February 7, 2019, I went to my Aunt Jennifer’s cottage at Augustine Cove, Prince Edward Island, to walk on the shore with her. Although I love the beach, I only ever go in the summer (preferably August, when the winter is warmer than in June or July), but for my school assignment I was to visit the beach in February. It turned out to be a beautifully sunny day, relatively warm for February in Prince Edward Island, and I also enjoyed the warmth of my aunt’s company.

Before waterfront property on Prince Edward Island became a luxury for the very rich, my paternal grandparents bought a lot and built a cottage, pictured on the centre left in the above photograph. Being Islanders, they were delighted to have their relatives around them. My Great Uncle Wendell also built a cottage (seen in the middle), which passed to my Great Aunt Linda upon his death, and my Great Uncle Alger built a cottage (seen on the right) too. My father’s older sister Jennifer and brother-in-law Brian built a cottage (seen left) years later, and it eventually became their permanent home. Upon my grandmother’s passing, the main cottage went to Dad and Jennifer’s younger brother Earl (who bought out their shares in it). For Dad and his siblings, the cottage and life on the shore meant summertime tranquility and intimacy with extended family, a place of water but also love and affection.

Having told Aunt Jennifer about the assignment, she kindly agreed to go down on the shore with me and act as photographer. Only one set of steps off the cliffs is safe in the winter; it’s the concrete set of steps from Uncle Wendell/Aunt Linda’s cottage. Although the beach is usually inviting and playful, in the wintertime it becomes a dangerous, forbidding place. “We’ll have to stick closely to the shore,” said Aunt Jennifer, “Because the tide is in, and I don’t trust the ice to hold us.” Still, she is willing to go down with me. We admire the ice formations and the view of the Confederation Bridge and other cottages. They are newer and grander, having been built when waterfront property became beyond the means of middle-class Islanders.

The South Shore of Prince Edward Island has very rocky beaches, making water socks a necessity for all but the toughest feet in summer. In addition, there are rocks piled against the sandstone cliffs, seen on the left of the above cliffs. They are ugly, made mostly of concrete but also rocks “from away” which do not fit with the sandstone’s beautiful red tones. At the same time, they serve a very practical purpose if my family intends to maintain a presence at Augustine Cove. Erosion is a serious concern there, as across Prince Edward Island. “We’ve lost forty feet of land since Grandpa and Grandma move here,” my aunt tells me. For the island experience as we understand it to survive, materials from away must maintain it. In the same way Prince Edward Island relies on a great deal of federal aid to maintain services for its residents. The rocks later provide another practicality by allowing us to climb up directly to Jennifer’s lot and not crisscross back to Wendell/Linda’s steps. Before we leave, I make sure that Aunt Jennifer takes a photo of the far end of the beach. That’s where my father proposed to my mother thirty years ago this summer. My mother was never a beach person, afraid of water and feeling like an outsider among my father’s extended relatives (though as far as I know they always got along very well). Still, my father chose the shore as the place to ask her to join his family and be his wife and the mother of his children. He wanted to incorporate her into the scene where he had enjoyed so much happiness.

I have not yet had lunch, and Aunt Jennifer, like most Islanders, insists on making me some. Before we go into her cottage, she draws my attention to the rosebushes (currently all brambles and thorns) by her steps. “Wild roses are the only variety that will grow out here with the spray from the straight,” she notes. “I transplanted them from right above the cliffs to by my steps.” In the summer, the roses will bloom as life on the beach will; they symbolize the links of land and sea which exist at the shore. I also note a more philosophical connection. Both the Greco-Romans and the medieval Cistercians associated with roses with love. The former saw them as a symbol of Aphrodite-Venus, the goddess of sex and female beauty, and the latter noted in their petals (which bloom in multiples of five) a symbol of the Five Holy Wounds of Christ. The love of a man and a woman, and the love of Christ to His Church, are potent expressions of the virtue. I also note a third expression, the love of family toward one another, which is the main message I take from the shore whatever the season may be. 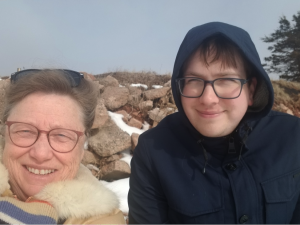 Aunt Jennifer and I on the beach