A Walk on the Edge
A Journey through the Lifespan
by Pamela M. Condon 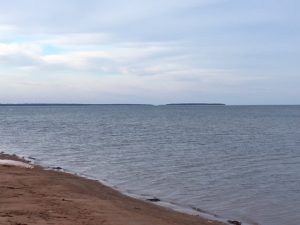 I’ve spent the better part of my thirty-seven years of life collectively “chasing the shore,” as author David Weale describes. As I walk the beach on this day, I nostalgically reflect upon my life and the significance of how the shore has been parallel to my lifespan thus far. This photograph represents hope, happiness, romance, grief, sadness and love all at once. Throughout my lifespan, I’ve experienced many of these emotions. The common denominator in these emotions is that the shore never changes. Its peaceful, steadfast, spiritual allure provides both celebration and solace for those who seek it.

My childhood summers were spent on the Panmure Island Beach. We rarely missed a day, unless it was raining; and even then we found a way of finding fun swimming in the rain. We swam for hours, collected sea glass, looked for starfish, ate barbequed hotdogs prepared on a small briquette barbeque and ate humpty dumpty cheesies by the handful – you know, the ones that turn your hands orange and then the orange stays under your grubby childlike fingernails until you go to the ocean and wash them off. We had sunburns that any dermatologist today would shake their heads at; but we loved it. We relished through the sunburned blisters to go another day. The beach and the experiences the ocean brought to us children were magical. We knew when we went back to school in September that we were just a little different than the other children, because we lived so close to the beach. We told stories and wrote essays titled “How I spent my Summer Vacation” with month-long details of going to the beach. It felt like we were the happiest kids on earth. 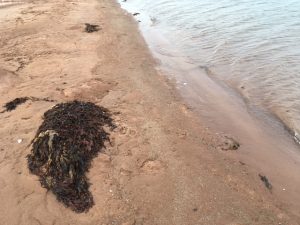 As teenagers, we continued to frequent the beach almost every day, or at least the days we had off from our summer jobs. If you were lucky, you might score a job at the beach, lifeguarding or scooping ice cream. I was not one of those lucky ones. The day beach attendance turned more into an evening/night attendance for me and my friends as teenagers. We had bonfires, laughed, learned to drink beer and attempt to smoke cigarettes (regrettably), and socialized until the early-morning hours. Our parents never worried about us because they knew that we were “just at the beach.” The shore surrounded us in the experience of non-judgmental fun. As teenagers we could all be ourselves. We would sing and play guitar, tell ghost stories and laugh until our bellies hurt. And we did so without our parents there – our first experience in “becoming adults.” 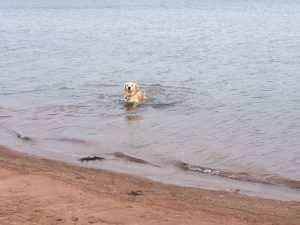 This is where we learn to sink or swim: just as my golden retriever Emmy is trying to figure out in the above photo. In my ever-so-confusing 20s, I would walk the beach with different meaning. This time not searching for the fun and mystery of my childhood and adolescence, but more searching for the meaning of life and what road I should take in finding personal meaning.

This is a time when the shore would again envelop me and provide me with the space to think and ponder. The shore, with its whispering flow of waves, would grant my parasympathetic nervous system the ability to slow down and truly think. My brain became more astutely aware that there is another world outside of my one-sided and one-track brain that was really only focusing on things that were somewhat beyond my control. I am reminded on my beach walk today of how the shore grounded me through those confusing days in my 20s. I’m thankful for those days but do not wish to relive them as it truly was a confusing age. 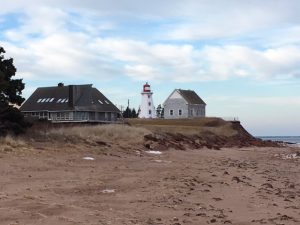 Settled in my 30s

Now in my late 30s I reflect on the likeness of the lighthouse to my life as I walk on the edge. I’ve made it through my 20s, and feel I’m in a great place both professionally and personally. There will always be variables surrounding me that are weathered, and this picture taken on my beach walk reminds me that some variables are worth fighting for, but others you must let go of: let them fall off the cliff. 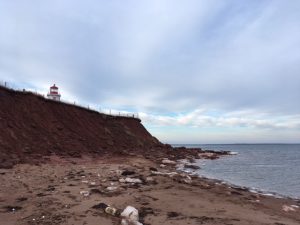 Walking the beach brings about many memories of my own lifespan to date. Many memories made. Some of my best life contemplation has occurred on these very shores. I guess you could say that perhaps the shore has molded me in a way. Weale (2007) states that there is no more powerful reminder of the beyond than the bright, encircling sea – and I agree with him. The shore speaks to my intuition, be it through a spiritual higher power or maybe just through the calming of racing synapses in my brain – either way, to me it is so much more than sand, salt and sea.  It’s my retreat and my haven and I feel blessed to have spent much of my lifespan roaming the shore.