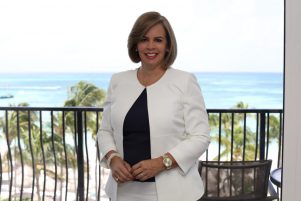 Mrs. Evelyna Wever-Croes, LL.M. is the current Prime Minister and Minister of General Affairs, Integrity, Energy, Innovation, and Government Organization for the Dutch Caribbean island of Aruba. During the last general election, Mrs. Wever-Croes’ party MEP obtained nine seats. Subsequently, she formed a coalition with the POR and RED parties. Aside from forming the first coalition government in over 20 years, she made history by being the first female Prime Minister of Aruba. After assuming the role of Prime Minister of Aruba, the big innovation gap and its impact on the Aruban economy became apparent. Therefore, the vision of Aruba’s new Government is to achieve socio-economic resilience by accelerating the innovation capacity of the island through a human-centered approach, putting the Aruba people at heart of all policies. With much love and commitment, the Prime Minister’s ambition is to create better opportunities for all citizens and build a solid foundation for the younger generations that will have the task to carry Aruba into an uncertain future and rapidly changing world. She believes taking a human-centered approach to policy-making combined with significant investment in innovation is the only way to help build a more sustainable future for generations to come. She is an advocate for social (purpose-driven) innovation and for women in innovation and STEM.

Before assuming the role of Prime Minister of Aruba, she obtained a Bachelor of Law degree at the University of the Netherlands Antilles in 1986. She then moved to the Netherlands to pursue her master’s degree at the University of Leiden, specializing in tax law. Upon her return to Aruba in 1989, Mrs. Wever-Croes began her career as a tax agent at the Aruba government tax department. She served as head of the Aruba tax department since 1994 for ten years. In 2004, after a successful and fulfilling career in the public sector, Mrs. Wever-Croes took on a new challenge as a tax lawyer at the Croes Wever Tchong law firm leading many local and international corporate tax cases. In 2009, she was approached by the leader of the political party MEP to become an official candidate for the party. After the 2009 general elections, she was sworn in as a member of parliament. In 2011, she was elected as the leader of the MEP party. After eight years serving as a member of the Aruban parliament, she was sworn in on November 17, 2017, as the first female Prime Minister of Aruba. Mrs. Evelyna Wever-Croes is devoted to her family, she is married and a mother of three children. More recently she became a proud grandmother of a baby boy. Additionally, Mrs. Wever-Croes is very passionate about giving back to her community and has served as a member of the civic organization Quota International, where she served as president of the Aruba board from 2009-2010. 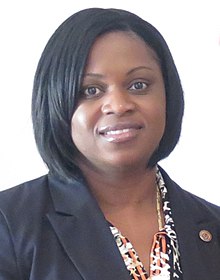 Leona Médita Romeo-Marlin is currently the Prime Minister of Sint Maarten, a position she has held since 15 January 2018. As Prime Minister Mrs. Romeo Marlin holds the responsibility for the Ministry of General Affairs, where she promotes the cooperation between the partners within the Kingdom of the Netherlands, French St. Martin, Caribbean Overseas Countries and Territories and CARICOM.

Prior to this function, Mrs. Romeo- Marlin served her country as Member of Parliament. As a civil servant, Mrs. Romeo-Marlin worked in the capacity as Policy Advisor of the Secretary General, of the Ministry of General Affairs and Department Head of the Civil Registry. Leona Romeo Marlin is an able administrator who reshaped and improved the Civil Registry.

Since her appointment as Prime Minister, Ms. Romeo Marlin has been charged with the responsibility to steer the reconstruction and redevelopment of Sint Maarten following the passing of Hurricanes Irma and Maria. The Government of Sint Maarten has created the National recovery and Resilience Plan that will serve as the roadmap to success.

While attending the UN General Assembly in New York, Prime Minister Romeo Marlin had the distinct honor to speak at the UN Nelson Mandela Peace Summit as representative of the Kingdom of the Netherlands on 24 September 2018.

Mrs. Romeo-Marlin was the driving force behind the 8th ICAO (International Civil Aviation Organization) Symposium that was held on Sint Maarten in 2012 and was one of the presenters at this auspicious conference. She has represented Sint Maarten at the SALISES Integration Conference – Rethinking Regionalism: Beyond the CARICOM Integration Project with a paper on, “The Need for Standardized Breeder Documents in CARICOM Countries”.

Mrs. Romeo Marlin holds a M.A degree in International Relations from the University of Amsterdam in the Netherlands and B.A degree in Political Science with a minor in French, from Adelphi University in New York.

Mrs. Romeo Marlin was instrumental in her managerial role in the Netherlands where she oversaw and mentored approximately 700 Antillean students across the Netherlands. Leona Romeo- Marlin also served as the Chairperson for the St. Maarten Monument Council, she is a Distinguished Toastmaster Master who functioned in various positions in that organization.

Mrs. Romeo Marlin is a strong advocate for community service as she has served as member of the Community Police Office Council, second vice president for the Speedy Plus Athletic Club, and President of the Sickle Cell Disease Association on the island of Sint Maarten. Leona Romeo-Marlin is a high achiever with a passion for the development of young people and the empowerment of women. 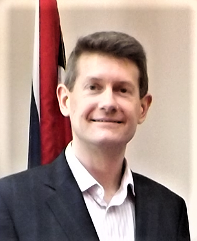 Dr. Peter Clegg
University of the West of England, Bristol.
KEYNOTE ADDRESS:
“Beyond Brexit and Cotonou: New Regionalisms in the Caribbean?”

Peter Clegg is Associate Professor in Politics and Head of the Department of Health and Social Sciences at the University of the West of England, Bristol. He was formerly Visiting Research Fellow at both KITLV/Royal Netherlands Institute of South East Asian and Caribbean Studies, Leiden, The Netherlands, and at the Sir Arthur Lewis Institute of Social and Economic Studies (SALISES), University of the West Indies, Jamaica. His main research interests focus on contemporary developments within the British Overseas Territories and the international political economy of the Caribbean. Recent publications include: Euro-Caribbean Societies in the 21st Century: Offshore Europe and its Discontents (with Chauvin and Cousin); Post-colonial trajectories in the Caribbean: The Three Guianas (with Hoefte and Bishop); and Grenada: Revolution and Invasion (with Lewis and Williams). Articles have been published in Small States & Territories; Third World Quarterly, The Round Table, and Canadian Journal of Latin American and Canadian Studies. 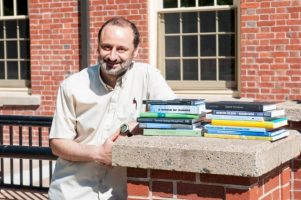 Dr. Godfrey Baldacchino
University of Malta
KEYNOTE ADDRESS:
“Woke up, got out of bed, dragged a comb across my head:
A day in the life of a SNIJ resident.”
WATCH ONLINE

Dr. Godfrey Baldacchino is a world-renowned scholar and researcher who has dedicated considerable efforts and energies to the growing field of island studies research – particularly that which seeks to contribute to a greater appreciation for different categories of small island territories.

Professor Baldacchino is the sole author or lead co-author of 22 books and monographs and sole editor or lead co-editor of 23 other publications. He is also co-author of over 120 peer reviewed articles and book chapters. He was the founding editor of Island Studies Journal based at the Institute of Island Studies at the University of Prince Edward Island, and is now Executive Editor of the Small States and Territories Journal at the University of Malta.

One of his recent publications from 2017 is a book chapter co-authored with Arjen Alberts, member of the Conference Planning Committee. The book chapter, which examines the cases of Aruba, St. Maarten, and the US Virgin Islands, is entitled “Resilience and Tourism in Islands: Insights from the Caribbean,” found in the book Tourism and Resilience, edited by R. W. Butler (Oxfordshire, UK; Boston, MA: CABI).

Dr. Baldacchino is also editor of The Routledge International Handbook of Island Studies: A World of Islands (London: Routledge), published in 2018.