Report by Don Jardine  (PDF version can be downloaded here)

A winter storm hit the Maritime Provinces on January 4th and 5th, 2018. Environment Canada forecasts for the storm predicted high winds from the east, south, southeast and southwest with gusts of over 100 km/h. Precipitation in the form of ice pellets, freezing rain, rain and snow were also forecast and a storm surge just below Stage 2 flooding levels for Charlottetown with a 60+ cm surge component for Summerside. Snowfall amounts were projected to be in the 15 to 25 cm rain with rain of up to 20 mm. 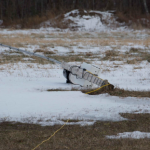 The UPEI Climate Research Lab maintains a network of climate stations across the province, which provides climate data for events such as this storm.  One of the UPEI Stations located in Glen Valley blew down on January 5th at 8:20 am when a wind gust recorded at 116 km/h occurred. A photo of the station after it was blown down is provided in Figure 1. 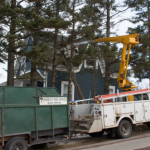 The Glen Valley wind gust was the maximum wind gust reported in the province during this storm except for reported gusts of 120 to 130 km/h on the Confederation Bridge during the evening of January 4th and early on the 5th. Other stations reporting high wind gusts were:

The combination of high winds, high tide and storm surge resulted in rafting of sea ice in some coastal areas with full exposure to the south and southwesterly winds. The Northumberland Strait coastal area between Victoria and West Point seemed to have been most impacted with ice chunks being compressed against the cliffs in areas such as Bell’s Point in Cape Traverse, Dawson Subdivision in Augustine Cove, the range light area in Victoria, Borden breakwater, Cape Egmont Wharf, Maximeville, West Point Lighthouse and other areas. Ice blocks were rafted to a height of over 8 to 9 metres in some areas causing ice to be deposited on the top of cliffs. According to a story on the CBC Prince Edward Island website, Philip Metcalfe of Cape Traverse stated, “It was a surprise to us because it happened so quickly”.  He had fallen asleep and when he woke the ice was over the cliff in front of his cottage. (CBC News, Jan. 5, 2018)

The peak water levels recorded on the Canadian Hydrographic Service tide gauge at Charlottetown during the storm were:

The January 5th high water event is one of the highest water levels recorded on the Charlottetown tide gauge since 1911. 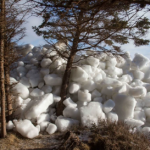 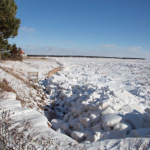 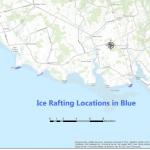 Ice rafting occurred at many locations during the storm and some are shown on figure 2. The areas where rafting occurred were all exposed to southeast winds at high tide and this occurred 00:30 on January 5th, 2018. The rafting areas are all exposed to deeper water zones near the shoreline line as areas with many sand bars would catch the ice blocks before they could reach the shoreline areas.

Ice rafting of the magnitude shown in the above photos is a relatively rare phenomenon on Prince Edward Island due to several conditions which must be met. These include a high tide, strong winds blowing on shore, low barometric storm pressure system, presence of ice, deep water near shoreline. The presence of ice in early January is unusual in recent years due to the warming of coastal waters due to climate change. Prior to this storm, there were 22 consecutive days between December 14th and January 4th, when the average daily temperature was below zero Celsius.

A documented episode of ice rafting occurred on February 19, 2004 when ice piled up at Maximeville against a cottage along the shoreline during the storm event known as White Juan. (Forbes, 2004) 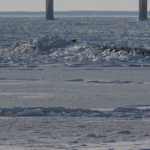 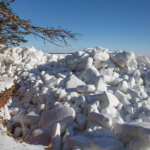 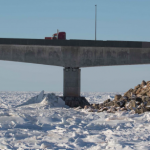